Athens the City an overview 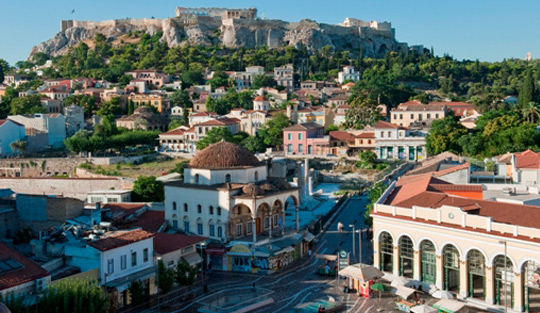 Sung much, photographed even more, extensively filmed by the eyes of foreign travelers and tourists, politicians and historians, Athens stands out from all the cities of Greece. It is one of the greatest tourist destinations and the administrative center of Greece, political, economic and cultural center of the country.

The town lies on the peninsula of Attica, Attica, near the coast of the Aegean Sea and between the riverbeds of Kifisos and Ilisos. The plain is cut by famous hills, such as the Acropolis and Lycabettus, which tower over the city.

On three sides the valley closed by mountains with a single large opening to the Saronic Gulf. The climate is typically Mediterranean with hot and dry summers and rainy winter average temperature of 27 Celsius in July, 9 Celsius in January. However, several times, the winter is frosty with snow.

Situated 8 km away from Athens is Piraeus, the seaport and the largest port of the country and a commercial center. The population of Athens and the surrounding Capital Region has about 40% of the total population of the Greece.

The exact time Athens founded has not been determined. According to tradition, the first inhabitants settled in the area between the 16th and 13th century BC. In ancient times a large economic and cultural center of the city-state of Athens developed. Its economic growth started from the second half of the 19th century, with the declaration as the capital of the country. The construction of factories and the establishment of industries attracted the entire population of Greece. An important role in the development of the city played the central geographical position that made ​​it a node of road, rail and sea transport.

The architecture of Athens is characterized by the coexistence of large monuments of antiquity, the Byzantine period and the dwellings of older and modern times. In Athens there is a multitude of educational institutions, primary, secondary and university education, public and private. There are also several museums that give visitors a good picture of Greece in general.

In 1834, Athens was declared capital of Greece, which had been already freed from the Turkish occupation. Today, as the capital of the modern Greek state, the city presents an organized big city, not similar to any other large cities of other countries.
Its current view is not so far from the romantic image that songs, photos and movies made it famous. The beauty, the hidden pleasures for the visitor are there waiting. Enjoy the city of Athens. 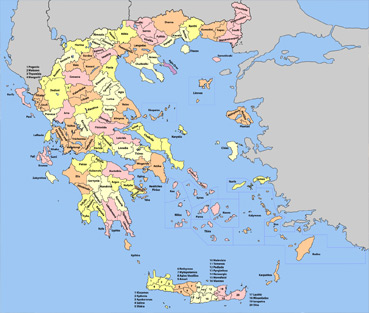 The beautiful country of Greece welcomes voyagers throughout the entire year. From the very first moment the guest arrives in Greece he has numerous choices: he can explore the mainland or visit one of the famous Greek islands, or even do both. Greece’s attractions include: Exceptional landscapes of natural beauty, world heritage monuments, religious journeys, a vibrant traditional culture and events, a never stopping nightlife and various types of sports activities among many other things to do. Travel within Greece is easy, safe and low-cost. The road network is widespread allowing the visit to every part of the country easily with your own or a rented vehicle. Rail travel is price competitive and offers comfy trip. Flights both on the mainland and to the islands are frequent from Athens International airport as well as the other airports over the country. The trademark of Greek summer, the Ferries depart daily for all the islands from Pireaus and other ports. All Greek islands can be accessed by ship and are connected one another. You can also combine different types of transport to travel. Whichever way you choose to visit Greece, it is sure you ll be captured by its beauty. You can search by place or find a Hotel in every part of Greece and book a hotel room online.

Find and compare the cheapest flights to Greece

Domestic flights depart daily and unite the whole country. Choosing the plane for travelling to a Greek city or one of the beautiful greek islands offers a fast, comfortable and safe journey. Plane fares are quite reasonable, particularly if you book a ticket early. Most cities and a big number of islands have airports and routes are hassle-free for tourists.

Athens International airport is one of is one of the newest on the globe. Delivering outstanding ground services, it is the most attractive entry point into Greece.

Greece has many other airports that welcome direct flights from all over the world.

During the summer months, because of the expanded traveler activity, the air companies complete additional flights to the current destinations and direct connections between popular tourist destinations, like Santorini. For this reason, you should ask for information either from the air companies or your tour operator prior to booking your flight ticket.

Travelling by Train to Greece

Travelling by train joins security with a moderate cost. The Athens-Thessaloniki line is an excellent option either you want to travel on the express which completes the trip in 4.5 hours or on the regular train. Another remarkable route is from Drama to Xanthi, one of the most beautiful train routes all over Europe. It was constructed in the 19th century and passes through uniquely beautiful landscapes, following the course of the Nestos River.
The excursion to Peloponnese is made with the Suburban Railway to Kiato (Pasio), the terminus, 30 kilometres to the west of Corinth. From there you can choose a National Railways bus to visit other cities.
Greece’s railway network is nearly 2,500 km long, coating most of the mainland. The transportation of travelers, luggage and driver-accompanied vehicles is carried out through regularly scheduled routes.

The routes are carried out by high-quality Intercity-type trains and by regular trains. When traveling by train, it is worth to take a look at the architecture of the old stations along the line. Most had been built at the end of the 19th century and are symbols of early industrial architecture.
The Greek railway network goes through many landscapes of unique beauty most of which are only accessible by train. There are also some special routes conducted by excursion trains like:.
Diakopto - Kalavryta (Peloponnese)
Pilio (Thessaly)
Nestos (Eastern Macedonia)

When completed, the city of Piraeus and its port will be connected to Athens, the Airport and other large urban centers in neighboring Prefectures (Thiva, Chalkida, Loutraki).

The Greek ferries are of a very high standard. Many shipping companies offer high quality services with modern and luxury ships, connecting every Greek island to the mainland, and each other, on a regular basis making it easy for anyone to enjoy an amusing and differing island-hopping trip.
The Greek armada, comprising of different kinds of vessels (passengers ships, ferry boats, conventional ships, high speed ships, hydrofoils, etc) operating on domestic and international itineraries, ensure a voyagers a fast, safe reliable and enjoyable trip.
The islands of Cyclades, Aegean, Argosarosikos and Crete are mainly linked with Piraeus port and Rafina port.
The Ionian Islands are linked with Patras, Killinis, Igoumenitsas and Astakos port.

Choose the island for your holidays and book your ticket now!
Travel by Bus

The majority of the capital cities of Greece are connected to Athens and each other in a broad network of planned routes by intercity buses (KTEL, in Greek “ΚΤΕΛ”), which agree to all modern regulations and guarantee the safe, fast and relaxing transportation of travelers.

You can also call 14 505 (from land or mobile phone within Greece) for more information about bus time schedules and destinations. This telephone administration provides itinerary information of intercity busses (KTEL) all over the country.


Travel by Car or Motorbike

The charmig feeling of freedom!

If you plan to tour Greece by car or motorbike, you will have the chance to visit remarkable landscapes, and have the freedom to choose to stop at any appealing spot you see. The Greek roads bungle the entire nation, arriving at even the smallest village at the top of the mountains. You can rent a car or motorcycle, a van or a SUV, 4x4 or even bicycle from the numerous available companies renting vehicles, even on line. The Companies renting vehicles offer plenty of choice at reasonable prices. You can also take the vehicle to the islands with Ferry boats so you can enjoy the islands without having to rent another car or moto at your destination.
If you want to explore Greece and its beauties then a road trip is the best choice. The national street system runs over the whole nation, forking onto innumerable, remarkable courses. If you wish, you can take part in organized trips by clubs of road trip lovers.
As you move away from the big cities, there is a wide range of options for excursions. You can tour the Peloponnese and its cities, the beaches, its villages, mountains, forests and rivers but also incredible archeological destinations and Byzantine temples.
Driving or riding to Thrace, magical Rodopi and Macedonia, you will discover the secrets of Epirus, Thessaly of the Gods and Centaurs, going through Central Greece and Evvoia with the unchanged in centuries cultural traditions; will leave you wonderful memories. Combining your road trip with a tour to a Greek island will complete your Greek experience. Driving in the Greek roads is safe and fast as the transportation system of the country is modern and continuously expanding.
The Rio-Andirrio Bridge connects the Peloponnese with Central Greece, is the longest cable-stayed suspension bridge in Europe. The “Egnatia Odos” motorway in Northern Greece is another new improved highway road.
Find below the main Highway roads and motorways in Greece. The number in rackets are the European road numbers: